Hair loss, also known as alopecia or baldness, is a loss of hair from the head or body. Hypotrichosis Simplex of the Scalp (HSS) is a rare hereditary disorder causing loss of scalp hair. Affected individuals, both males and females, suffer from a progressive loss of hair that starts in the middle of the first decade of life resulting in almost complete baldness by the third decade which is associated with major psychological and sociological effect of daily function. HSS is caused from a specific change in the genetic code of the gene CDSN encoding corneodesmosin protein which is important for the normal function of the skin outer layers and human hair growth. The change in the genetic code results in the production of a short and defected product that accumulates around the hairs and prevent their growth.  Albeit major advances in medical genetics, there is no treatment for HSS.

Gentamicin is a popular antibiotic therapy which is commonly used for the treatment of bacterial infections. In addition, gentamycin is known for its ability to bypass the genetic defect that results in abnormal protein production as in HSS. In this study, researchers from the Laboratory of Molecular Dermatology  in the Division of Dermatology, Dr. Alon Peled, Dr. Liat Samuelov and Dr. Ofer Sarig, found that gentamicin can be an effective treatment in HSS. First the researches developed a molecular model of the disease and showed that gentamicin can lead to the production of a normal corneodesmosin protein in cell cultures. Next, the researchers performed a clinical trial in which topical application of gentamycin twice daily for 6 months to the scalp of 4 HSS patients resulted in significant hair growth. The results of this study which was recently published at the British Journal of Dermatology, show that gentamycin is a potential treatment for patients with HSS. 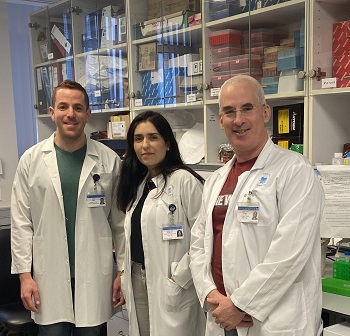